Why God Cautions Against False Prophets and Teachers 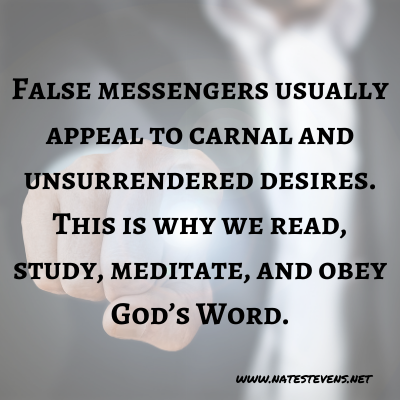 For false christs and false prophets will rise and show great signs and wonders to deceive, if possible, even the elect [Matthew 24:24].

Why is God specifically angry with false prophets, false teachers, and false religious leaders? Why did Jesus specifically warn against them? If they are false, what’s the big deal?

Although our cultural appetite has become tolerant or lukewarm in our approach to falsehood, God has not. We may have become conditioned by this world’s devolving moral standards, but God has not. Some of us may listen to or follow this “prophet,” that “teacher,” or some other “religious leader” because they sound appealing. But God warns against anyone who strays from the absolute truth of His Word.

Lesson learned: What naturally feels good is often the opposite of what the Holy Spirit wants me to do. The flesh wars against the Spirit [Galatians 5:17]. The carnal, worldly side of this life wants to be attracted, appealed, and coddled. But the spiritual side of a believer involves the indwelling of God’s Holy Spirit of truth [Romans 8:9]. The path to spiritual sanctification involves crucifying the flesh (Romans 8:13] to putting to death carnal desires [Colossians 3:5]. Sounds appealing, right? False messengers usually appeal to any carnal and unsurrendered desires.

So, the very things (religious stance, political leaning, personal mindset) we feel so passionately about, may in fact be what God wants us to surrender to Him. Instead of chasing and applauding those who promote or agree with our preferences, God wants His followers to stay grounded in His truth [Colossians 1:23].

Does God get angry with false leaders, prophets, teachers?

Before protesting with the New Testament, new covenant, and grace, remember God doesn’t change. “I am the Lord, I do not change” [Malachi 3:6]. Grace. Holiness. Justice. Mercy. Love. All combine within the Godhead. His grace doesn’t negate His holiness. The new covenant doesn’t override how God reveals Himself in the Old Testament. Actually, while instituting the new covenant, Jesus said, “Sanctify them by Your truth. Your word is truth” [John 17:17]. His entire Word is truth. We must look at its entirety and not pick and choose what we like.

Here are some examples of God’s dim view on those who speak falsely (bold text added for emphasis):

As the source of perfect and absolute truth, God hates anything and anyone who lies and promotes falsehood [Proverbs 6:16-19].

I’ve learned whenever there’s a warning, I should pay close attention.

When speaking of the end times, Jesus cautioned, “Take heed that no one deceives you” [Matthew 24:4]. Why would He lead off with that? Because He knew “Many false prophets will rise up and deceive many” [Matthew 24:11]. He warned us to make us aware of these wolves in sheep’s clothing [Matthew 7:15].

As the father of lies, Satan is feverishly deceiving as many people as he can before he runs out of time. His minions and imps whisper their raspy heresy and apostasy to anyone who listens. Sadly, too many people with “itching ears” [2 Timothy 4:3] listen to “deceiving spirits and doctrines of demons” [1 Timothy 4:1].

Two disciples who personally heard Jesus’ warning echoed it years later. Peter said, “There will be false teachers among you, who will secretly bring in destructive heresies, even denying the Lord” [2 Peter 2:1]. John went even further. “Do not believe every spirit, but test the spirits, whether they are of God; because many false prophets have gone out into the world” [1 John 4:1].

So how do we differentiate between the false from the true? What are the identifying marks of the false teachers, pastors, prophets, and other “religious” leaders? Peter, who repented of his own falsehood when he denied the Lord, pinpointed their deceitful traits in the second chapter of his second epistle. False individuals:

This is the Biblical description of those who propagate falsehood! Not very flattering, is it? Nor is it flattering for God’s people to listen to or follow them. If we would simply pay attention to Biblical warnings and cling to only God’s truth, these greasy seducers wouldn’t appear or sound so appealing.

In addition to this descriptive list of identifying characteristics, here are several primary ways to unmask current day false proclaimers.

Their lives don’t match their message

They pose as life coaches yet their lives are a wreck. Posing as relationship counselors, they bounce between failed relationships or are still drawn to abusive relationships. Flashy, wealthy lifestyles run in opposition to Christ’s humble, modest life. They talk a good game, but “by their fruits you will know them” [Matthew 7:20].

They water down God’s Word to fit cultural preferences or societal tolerances. Instead of teaching God’s unwavering moral standard, they introduce “feel good” completely lacking in Holy Spirit power and conviction. They promote situational ethics instead of God’s truth. They have a “form of godliness” but deny its power [2 Timothy 3:5].

With soft 3-point vignettes, strobe lights, and pounding music, they provide superficial man-made, homespun tales of self-improvement. Inspirational and motivational techniques masquerade as God’s truth. Instead of leading people to a personal relationship with Christ [John 3:3-7] and a life of spiritual surrender [Romans 12:1], they promote a feel-good “worship experience.”

Individual words, phrases, or verses are taken out of context to provide snappy, sensational one-liners. Instead of giving the “whole counsel of God” [Acts 20:27], they use Scripture to support popular or cultural themes. Self-awareness, promotion, and advancement replace self-denial, surrender, and suffering. Humanism and rationale substitute for inspired, inerrant Scripture (“I can’t get comfortable with a loving God ever sending anyone to hell!”). They fail to discern appropriate application and dispensation in Scripture.

They promote ecumenicalism and coexistence instead of separation and holiness

Declaring there are many ways to the same God, they contradict Jesus who said, “I am the way, the truth, and the life. No one comes to the Father except through Me” [John 14:6]. They promote global inclusion into heaven and a prosperity gospel. Yet Jesus said, “Narrow is the gate and difficult is the way which leads to life, and there are few who find it” [Matthew 7:14]. There is no fellowship between truth and falsehood, no coexistence between light and darkness [1 John 1:6-7; 2 Corinthians 6:14].

Like Satan in the Garden of Eden, they question: “Did God really say…?” Waving their degrees, these “higher learning critics” attempt to dismantle God’s Word with doubt and humanistic logic. Once God’s Word becomes debatable, the floodgates open for all sort of moral perversion under the guise of “religion.” Personal preference, opinions, and “story” matter more that God’s Word. They are blind leaders of the blind [Matthew 15:14].

They tend to be arrogant and swayed by audiences’ desires

Initially starting humble and doctrinally sound, they prostitute God’s truth for larger crowds. Not wanting to upset anyone or be perceived as intolerant or fanatical, they say whatever is currently trending in society [2 Timothy 4:3]. As the crowds grow, so do their leaders’ heads. Moral relativism, preferential tolerance, the social gospel, and societal approval replace Biblical evangelism, regeneration, sanctification, and discipleship. All while God stands outside waiting to be invited in [Revelation 3:20].

Yes, we are wise to beware and steer clear of false religious leaders. Their depravity, doom, and destiny are clear. God repeatedly states He is against them and will judge them. Jesus warned us to protect us against their deception.

Instead of listening to apostates and worldly wisdom, far better it is to read, study, meditate, and obey God’s Word with the Holy Spirit’s guidance. “Till we all come to…the measure of the stature of the fullness of Christ; that we should no longer be children, tossed to and fro and carried about with every wind of doctrine, by the trickery of men, in the cunning craftiness of deceitful plotting” [Ephesians 4:13-14, bold text added for emphasis].

May God open hearts and minds to His absolute and immutable truth!