Why on Earth Would Dust Celebrate? 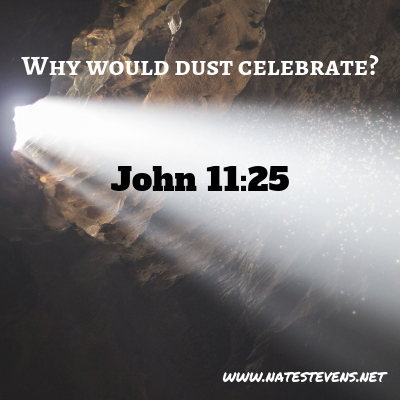 What would make dust celebrate?

Crouched in a musty corner of a Middle Eastern tomb, I watched as family and friends hurriedly embalmed him, muttering about an approaching deadline. What difference do deadlines matter now?

The yellow, reddish-marbled, limestone walls, ceiling and floor brightened an otherwise somber cavity. Though recently hewn, it was small, cramped. I couldn’t stand upright. But how else should an earthly tomb be designed? I knew little about such death, darkness, and finality. I’d been on numerous missions throughout my Captain’s galaxies—this was a wretched final resting place.

So much promise. Unmatched power. Yet cut down in the prime of life. For what? Jealousy? Hatred? Anger? Contempt? Disagreement with what he said? The presiding officials had nothing against him so they fabricated “evidence” in order to condemn and kill him. How was this permitted much less possible?

Actually, his mission to earth shocked me. I was part of the hand-selected few Gabriel chose to announce his human birth. Yes, we’d been here numerous times and maintained limited interaction at his command. But this time he wanted to arrive as an earthling.

Why would infinity stoop to inhabit time and space constraints? How could anything three-dimensional contain or interact with limitless supernaturality? Wouldn’t the created explode when touched by deity?

Flabbergasted yet loyal, I observed his humble origin and earthly years. Unbounded energy was sapped. The very essence of life hungered. Some respected him; most refuted and rejected. Do they have the capacity to understand who he is?

Unknown to me, he destined this journey eons ago. Plans foreordained in myriad galaxies played out before my sight. Even so, we were restrained as our Captain lived meagerly, humbly, and compassionately. Yes, he had a passionate, holy anger; but his loving heart was even more fierce.

A mere few hours ago, I witnessed the termination of this earthly mission. Feeble humans violated the altogether lovely. The high and lifted up was mauled by filthy hands and murderous treatment. Perfect health succumbed to fever. Living water became dehydrated. Sinless blood spurt from torn arteries. The breath of life gasped for air. Compassion was riddled by perversion. Flies desecrated the eyes and mouth of the eternal Word made flesh. Public shame exposed heaven’s nobility.

I watched him dying—a bloody, horrific, agonizing death. My comrades and I—twelve legions strong—anxiously awaited; hands steady on lightning-sharpened blades. We had vanquished far less injustices. Only two destroyed Sodom and Gomorrah; one vanquished the Egyptian firstborns. One word from our Captain would launch a swift, devastating rescue. Before blazing through star-studded universes to escort him back to his former glory, our fiery swords would disintegrate these pitiful, puny, proud earthlings along with the ugly, brutish, swirling demonic influences.

Yet, that word never came. Instead, from the darkness I heard forgiveness and dreadful sobs from my Captain questioning why he was forsaken by The Almighty. Unable to comprehend, I kept my eyes fixed on my Captain. Crushed by an unseen load, he chose to bear it alone.

We are here, my Lord. Just say the word!

Instead, the order came to stand down.

Invisible to earthly eyes, I watched vulgar men snatch his bloodied, broken body from the cross then fling it to the ground. Only a few brave friends and family dared bring his body to this tomb. Out of respect, I would await time to be alone with my fallen Captain.

Dim light filtering through the tomb’s blocked entrance prevented complete darkness. I could still outline the shape lying before me. Oh, my Captain, why didn’t you call? We were there, ready for even your slightest nod!

Why he subjected himself to such desecration was beyond me. I didn’t understand why immortality would deliberately put on mortality. Why end such a glorious existence? To what purpose was such a wasted effort on undeserving people?

Wait. I froze, hand gripping my sword. Something moved.

I rubbed my eyes. Though angelic, I was tired. The week’s nightmarish events fatigued me and my watch had been long. Dust particles danced in the dawn’s new light. They appeared to be celebrating. Why would dust celebrate?

There it was again.

His chest rose a second time. Collapsed lungs sucked in new air. He was breathing? How can a corpse begin to breathe on its own? By what means can a blood-drained body self-oxygenate? How can someone reclaim life after death? To suppose he was merely unconscious was ludicrous. My Captain had been dead.

Yet, he was now breathing, yawning. Actually, his yawn sounded like a….battle cry? His deafening roar rumbled the earth.

Transfixed, I squinted to focus in the dim light.

He extended one arm followed by the other. Though tightly wrapped, he aligned his molecular structure with the fibers of the burial cloth, morphing his arms through.

Calmly unwinding the blood-stained grave clothes, he wasn’t frantic as if awakening from a nightmare. No, every move was deliberate as if rehearsed. Feeling for where the strips were secured, he methodically loosened them—feet first so he could stand.

I saw muscles previously torn, instantly repaired. Flayed tendons, displaced joints, punctured membranes, everything miraculously restored. With the exception of his hands and feet. Why wouldn’t he heal and restore those gaping scars? Maybe as memorials to his ordeal?

Placing the bundle on the burial ledge, he pulled the encircled napkin from his head. Folding it carefully, he placed it where his head had lain. Was that a clue or signal?

Looking up, his eyes met mine. The Captain of the Hosts was alive! Death had no further claim on him! I knelt, head erect, not wanting to miss a thing.

“Blessings upon you, my faithful one. Thank you for staying.”

Oh, sweeter words I never heard! “I couldn’t stay away, my Lord. Love and loyalty compelled me to remain.”

His smile erupted with a million sunrises. “Then you know why I’ve done what I have. Love for mankind compelled me to fulfill my redemptive purpose so those who desire to be with me may do so.”

Stunned by his fierce love and complete victory, I followed him outside.