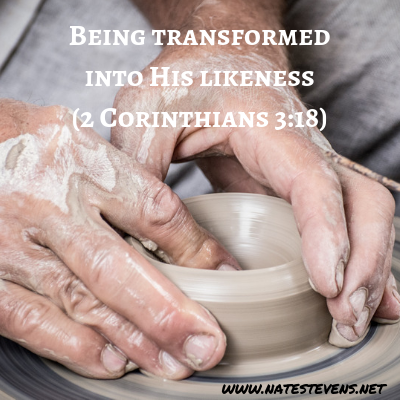 But we all…beholding as in a mirror the glory of the Lord, are being transformed into the same image (purpose) from glory to glory, just as by the Spirit of the Lord. (2 Corinthians 3:18, parenthesis added)

God’s purpose and kingdom are never compromised by sinful choices, rebellion, or lack of surrendered hearts. He continues His work while we face the headaches of our regrettable mistakes, impatience, and resistance.

The Prodigal Son was not divinely destined for the pigpen, but wound up there due to his sinful choices. Instead of living with his father, learning from him, enjoying his company, and being groomed for success, he separated himself from his father. He heard the grunts and snarls of pigs, and slid around in pig manure. His situation changed because his disposition changed—that is the counterfeit nature of sin. What he thought was freedom and carefree living was bondage, lack, and emptiness. He was not banished or punished. He merely lived out the consequences of his rebellious heart.

God doesn’t want us to live under harsh discipline. But when we choose to sin, He has no other option. He wants to bless us, prosper us, and fulfill us in our appointed destinies. But He won’t do that while we resist His transformation and remain in our pigpens of sin. So, He often makes our circumstances bad enough to where we want to change our situations bad enough. Yet, even though He influences circumstances to motivate a change of heart, He coerces no one.

However, do not confuse corrective discipline with progressive refinement. Progressive refinement is God’s method of ongoing transformation “until Christ is formed in you” (Galatians 4:19). He works gradually and unrelentingly to conform us “to the image of His Son” (Romans 8:29). Either way, His purpose will be fulfilled. By willingly surrendering to His will, He makes us part of His purpose, equips us for the task, and empowers us until the day of completion.

How blessed we are with a loving Father who corrects when necessary and refines as necessary. He exchanges pigpen desires with celestial longings all while molding us into His likeness and preparing us to serve as kings and priests in His kingdom (Revelation 5:10). Oh, to join the ransomed song of thousands times ten thousands in proclaiming, “Blessing and honor and glory and power be to Him who sits on the throne, and to the Lamb, forever and ever!” (Revelation 5:13).

Transform us today, Oh God, and make us useful vessels of Your purpose!